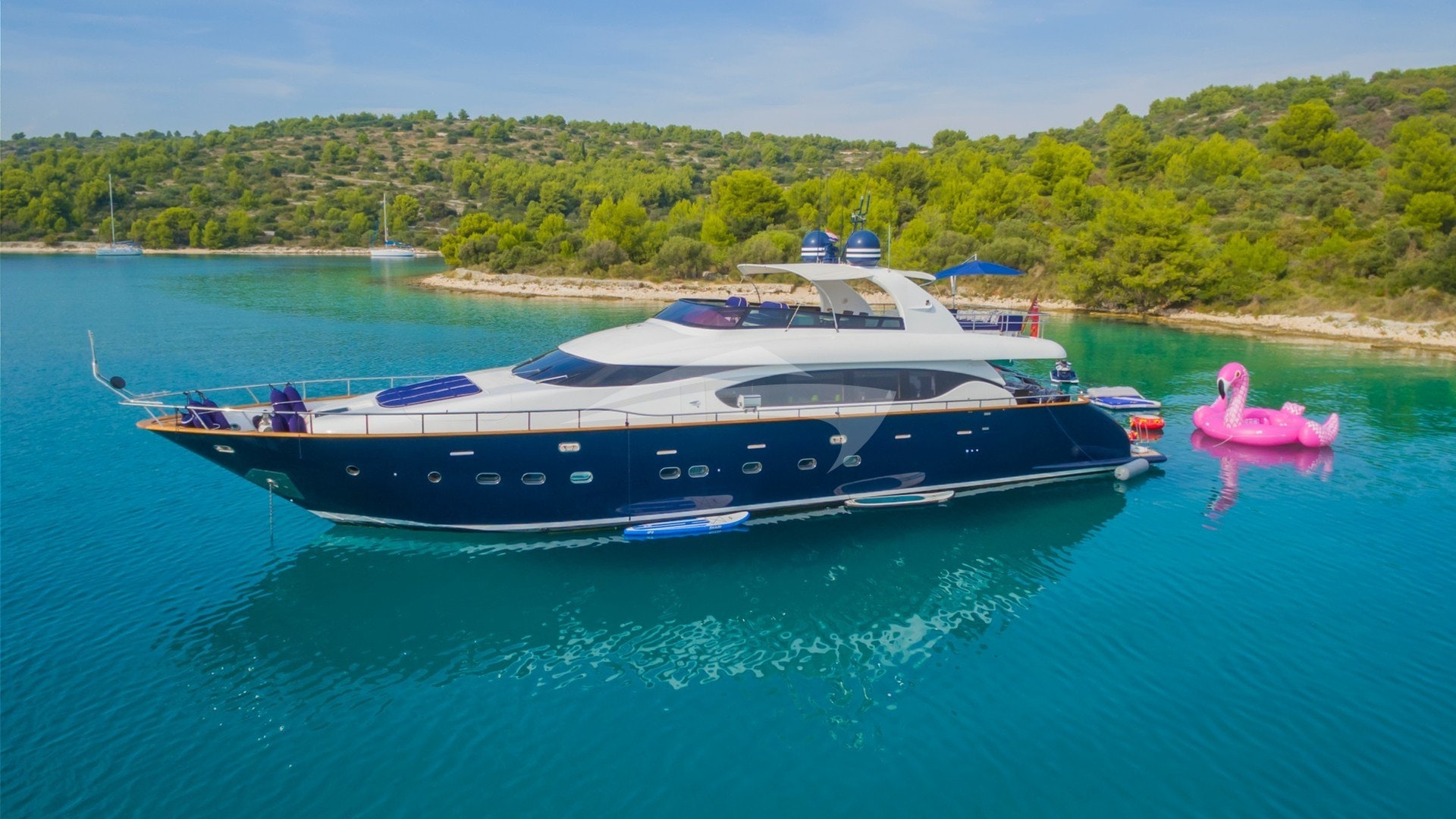 Zeljko was born and raised in the beautiful historic town of Split, Croatia. Growing up he was always involved in various sports and outdoor activities in particular sailing. Zeljko participated in numerous sailing regattas and represented his yacht club locally and internationally. Having been raised on the Dalmatian coast his family has always been involved with boating and the sea. They own a vintage wooden boat that has been in the family for over 60 years and ran a multigenerational sail manufacturing company.

After graduating nautical school, Zeljko obtained maritime certificates and hands on experience. He started working on commercial vessels in the off shore oil and gas industry. After settling down and starting a family Zeljko transitioned to private and charter yachts. Most of his professional career was spent on yachts from 35 to 130 feet.
Zeljko has a true passion for yachting which he loves to share with the crew and charter guests. His hobbies include: sailing, biking, skiing, tennis and vintage boat restoration. Zeljko currently resides in Split with his wife Anamaria and daughter Karmen.

As the Captain Zeljko is responsible for the safety, overall running and financial management of the vessel, crew and guests. He ensures the safe and efficient operation of the yacht at all times, including compliance with all safety procedures and regulations, as well as adherence to International Flag, Port State and local laws and regulations. The Captain has a close relationship with his crew and provides leadership, guidance and support, while encouraging both teamwork and individual accountability.

Rising to new challenges is what I do best. Over the past 20 years, my talents led me to chef positions across Croatia, Germany and Norway, providing me with the opportunity to constantly enrich my culinary repertoire.
However, it is in private service that I gain the most personal satisfaction. Thanks to 14 years of experience as a private chef on yachts, I pride myself with understanding my clients and their unique tastes and preferences.
I love creating new dishes based on traditional Mediterranean cuisine, with a wide variety of modern culinary influences. My recipes come to life with fresh, organic ingredients sourced from local growers.
I like the challenge of trying different things. When it comes to producing memorable events, whether it’s a casual dinner or a formal gala, I can manage all the details. Private service is the perfect fit for my innovative nature. For me, a happy client is the greatest satisfaction of all.
Languages: English, Basic: Russian, Spanish, German, French and Norwegian

I am born and raised by the sea in a small and lovely Mediterranean city named Kaštela. I am passionate about sea and everything that goes by with it. For the last 8 years my mission is to deliver only the best results to my employers and clients. My career started at one of the best charter companies in this area of Europe where I worked for 5 years. My main responsibility was maintenance of high level of costumer’s satisfaction with condition of yachts and sail boats from 8 up to 22 meters. For me the perfect position is one that challenges me and allows me to acquire new knowledge. Few years ago I decided it’s time for a next step in my professional development, so I started to work on private motor yachts. Working on 28 to 33 meters private yacht’s busy summer schedules, I was in charge of navigation, maintenance, tender driving, fishing trips etc. Sea is the best office in the world I could ever imagine. I’m happy to tell that my dreams came true with my first working position on boat and it’s still continued.

I come from in Zadar, a city on Croatia’s Dalmatian coast. The oldest continuously- inhabited city (more than 2000 years) also known for its Venetian and Roman history. I’ve spent most of my childhood summer’s on Island Murter by the sea and going fishing with my grandfather. In the family of seamen, the love towards sea was unquestionable only what nobody expected that I will decide for yachting career.
After finishing faculty for Administrative Lawyer at University of Split and working some time at Misdemeanour Court in Zadar, I was looking for new challenges and different experiences. That was 13 years ago. Since then, I have been working as stewardess on many sailing yachts, catamarans but my main experience comes from luxury yacht charter working as stewardess on bigger motor yachts. In year 2008., I was employed as personal assistant/office manager for yacht owner. I worked in office for 7 years, but life has its surprises, so in 2017 I started my yachting life again and never looked back. In my spare time I enjoy in my hobbies yoga, insanity workout and event management. My diverse experiences helped me in becoming dynamic, cooperative, calm, understanding, friendly and respectful person and crew member.I always strive to provide top quality service to the guests so they can leave with exceptional experience and remember their holiday as unforgettable.

How much to charter ASHA?

How many guests on board ASHA?

ASHA can accommodate 9 sleeping guests on board in 4 cabins, with the ability to cruise with up to 12 guests and entertain groups up to 12 guests while at anchor or moored at a marina.

机动游艇 ASHA is displayed on this page for informational purposes and may not necessarily be available for charter. The yacht details are displayed in good faith and whilst believed to be correct are not guaranteed, please check with your charter broker. Charter Index does not warrant or assume any legal liability or responsibility for the accuracy, completeness, or usefulness of any information or images displayed as they may not be current. All yacht details and charter pricing are subject to change without prior notice and are without warranty.