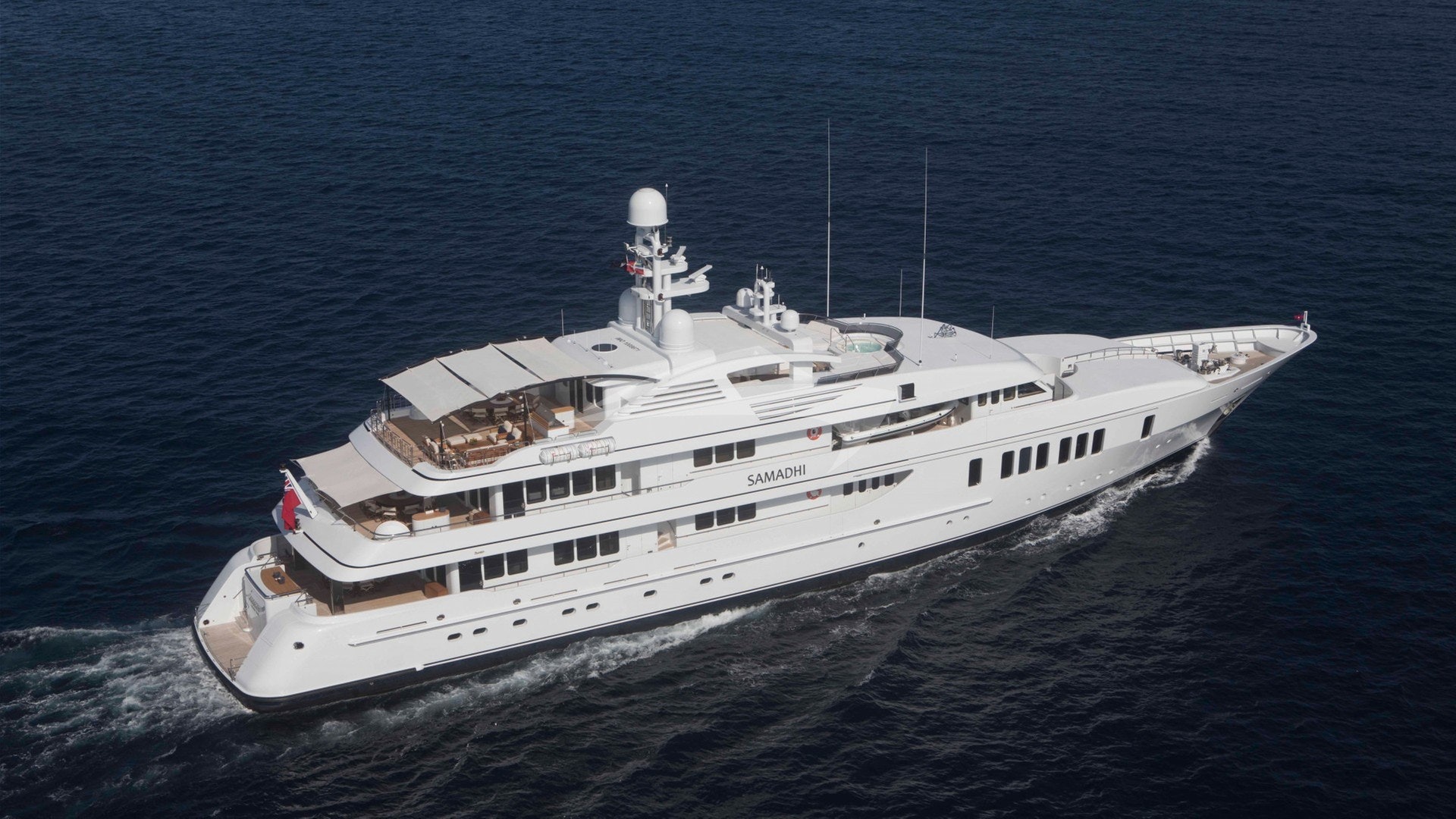 "Marko" comes from the home counties, just outside of London, England. He joined the yachting industry 10 years ago but has always enjoyed working at sea. He began with a children's adventure camp as a sailing and canoe instructor, before moving to the Caribbean for 3 years. Whilst in the Caribbean, Marko skippered the racing sailboat, "Stars & Stripes" winning the America's Cup in her retirement. When not on board, Marko enjoys life in Central Florida with his wife.

"Marko" comes from the home counties, just outside of London, England. He joined the yachting industry 10 years ago but has always enjoyed working at sea. He began with a children's adventure camp as a sailing and canoe instructor, before moving to the Caribbean for 3 years. Whilst in the Caribbean, Marko skippered the racing sailboat, "Stars & Stripes" winning the America's Cup in her retirement. When not on board, Marko enjoys life in Central Florida with his wife.

Patrick hails from the historical Victorian town of Pietermaritzburg, South Africa. He became accomplished in the hospitality industry as a restaurant manager at a young age. His thirst for adventure and travel led him to pursue a career in the yachting industry in 2010. Patrick is currently working on obtaining a Master 3000-GT License and is passionate about mountain biking and hiking in new locations around the world. He also enjoys reading biographies, cycling, playing scrabble, surfing and maintaining his fitness.

Nadine comes from a Spanish family, who immigrated to Germany when she was a child. There she studied hotel management and tourism, but always longed to live by the sea. When the opportunity arose to bring her knowledge on to a “floating hotel”, she jumped at the chance and joined the yachting industry. Loving every moment, she refined her skills providing exquisite service to guests. Being around the ocean ignited her passion for marine life and the underwater world and from there, she decided to pursue her education and become a scuba diving instructor. With her “Yes-I-Can” attitude, she brings a very high level of personalized service and guest satisfaction. Samadhi offers her the possibility to combine her love for the ocean with a career in hospitality. Through her extensive globetrotting and love of travel, she has become fluent in Spanish, German, English, French and Italian. In her leisure time she can be found either waterskiing, swimming or partaking in a hot yoga class.

Growing up in Norwell, Massachusetts, Megan aspired at an early age to become a Chef. She went on to receive a degree in culinary arts and food service management, as well as a Masters in Hospitality and Business from Johnson and Wales University in RI. Always top of her class, Megan won many cooking competitions and awards. Upon graduation, she was hired as Chef de Cuisine by the Four Seasons / Regent hotel Group. While she was fortunate to have had some of the world's most discerning clientele, she was enticed by the freedom and challenges of creating menus using local ingredients and adapting international culinary skills.

"Mickey" was born and raised in Luton, UK with his Dublin-born Irish parents. Mickey has a knack for learning languages having studied Italian and Spanish before pursuing some time as a mixologist. This, combined with his passion for travel and experiencing other cultures, led Mickey to live and work in some trendy locations, including Rome, Madrid, Ibiza and the French Alps. During this time, he was spotted by a yacht Captain who invited him to join his crew whilst cruising the Mediterranean for 2 years. Mickey's favorite pastimes include skiing, soccer, swimming and snorkeling. He plans to earn his dive certification in his spare time.

Guy grew up in Chelmsford, England. An only child, he comes from a small close-knit family of drama / theater enthusiasts. Veering away from acting, his hobbies reflect anything having to do with adrenaline. Rugby bring his favorite sport to play, Guy earned the award of club colors on his team. In his spare time, he also enjoys playing cricket and golf, and even holds a talent of juggling. Guy recently graduated from Exeter University, where he studied physics. He joined the yachting industry for that same love of challenge and camaraderie that he has for rugby.

Jonathan, or Jono as he is known by everyone that meets him was born and raised in Johannesburg, South Africa. During his time in high school Jono realized his passion for sports and the outdoors. This took him places like New Zealand, Holland, France and Belgium all while playing cricket and hockey. It was during this time that he discovered his love for traveling and meeting new people. At the age of 18 Jono decided to leave home to travel once more, and to begin a career in yachting. He has completed his yacht master offshore and the majority of his OOW modules, which he hopes to complete in the near future. Yachting has taken him to many new and amazing places which is why he has never looked back. In his free time, Jono enjoys cycling, swimming, scuba diving, and catching up with friends.

Lee was raised in South Wales, UK on a small family farm. His father being a sailor and teacher of the martial art, Aikido, Lee learned both skills from an early age and continues to practice today. A notable accomplishment, Lee motorcycled 18,500 miles across the US, including through the 135°F Death Valley in Eastern California. In his earlier years, Lee was employed in a variety of industrial and engineering jobs, eventually leading him to work on tall ships in the Grenadines. A natural progression, Lee soon became a yacht engineer and has been doing it ever since.

‘Suzie’ is an all-rounded sportswoman, having spent the winter skiing on the slopes of Europe and the summers sailing in the seaside resort of Portsmouth where she grew up. Teaching kite surfing, windsurfing and sailing in Greece for four summers sparked the natural progression into yachting. Suzie joined the yachting industry over three years ago and has integrated her passion with her work, with her love of the outdoors and added interesting fact she would love to travel to space! In her free time, Suzie enjoys dusting off the kite surf along the Floridian coast and plans to extend on her already lengthy travel list, to explore all corners of the globe.

Sean grew up in the town of Hermanus, South Africa, popular for its Southern Wright Whale watching. Growing up along the rugged coast, cultured Sean an affinity for kite-surfing, mountain biking and SCUBA; more specifically, wreck-diving. He also spent his youth sport fishing at the provincial level. For 3.5 years, Sean worked as a rescue swimmer and a training coxswain for the South African Coast Guard. A sizable accomplishment, he skippered a 44' crewed from South Africa to Ft. Lauderdale spanning the course of 2 months.

Sarah grew up in a farming area in rural South Australia. Her love for travel and new experiences lead her to become an exchange student and spent one year living in Brazil thus beginning her life of travel. She then began working for an international resort company working within Asia for 6 years. Sarah gained a lot of hospitality experience moving through-out many roles within the company from the reception desk to the bar and became an organizer for many of the sporting activities. Her favourite role was working in the circus, performing flying trapeze and aerial acrobatics in nightly shows for the guests as well as passing on her passion and knowledge of the circus acts to children and adults during the days. Sarah joined the yachting industry one year ago and is excited for the new adventures.

Gaylaine ‘GQ’ was born and raised in the metropolitan city of Toronto, Canada. At an early age, she discovered her love of travel as her large family would take road trips every summer; her highlight being Highway 101, touring down the West Coast US. Having a love for the outdoors, Gaylaine enjoys skiing, kayaking and hiking. She is bilingual, speaking English and Cantonese. She worked as a lifeguard throughout high school and studied pre-med in college. Longing for a change of scenery, Gaylaine moved to Antigua in 2013, where she attended medical school. Enticed by the surrounding waters and variety of yachts anchored in English Harbor, she decided to transition into the yachting industry.

Shannon was born in New Zealand but grew up on the Sunshine Coast in Queensland, Australia. It wasn’t long after completing her Bachelor of Business degree that she quickly realized being confined to a desk job was not for her. Her yearning for adventure and travel lead her to the yachting industry. Shannon enjoys anything active, outdoors and on, in, or near the ocean. She has completed a half marathon in Fort Lauderdale, Florida, as well as a full marathon in Valencia, Spain. She has recently completed a 200hr Yoga Teacher Training certification. With a passion for working with people and helping others, she intends on becoming a registered nurse after her yachting career.

Nicole, the youngest of ten siblings, was raised in Johannesburg, South Africa. With a yearning to express her creativity, she studied photography and graphic design in university. She would later use these skills as an employee for UFC. This flow of creative energy not only spanned her sense of sight, but also her sense of taste and smell, landing itself onto a plate. With only the culinary teachings from her step father, Nicole joined the yachting industry with a lust for cooking delicious food. Since her start as a chef, she has extensively traveled Asia, building upon her repertoire and love of different cultural flavors. Nicole is excited to be able to express and share herself through cooking onboard Samadhi.

机动游艇 SAMADHI is displayed on this page for informational purposes and may not necessarily be available for charter. The yacht details are displayed in good faith and whilst believed to be correct are not guaranteed, please check with your charter broker. Charter Index does not warrant or assume any legal liability or responsibility for the accuracy, completeness, or usefulness of any information or images displayed as they may not be current. All yacht details and charter pricing are subject to change without prior notice and are without warranty.